Sort of weird, many years ago I was really excited about the variety of tools that I had used in the span of only a few months of working on projects at the Massachusetts College of Art, at Handshouse Studio, and with the Timber Framer’s Guild. I guess I made this page as a kind of snapshot of that time. If you’re interested in seeing what I’m doing nowadays, check out my sculpture portfolio. 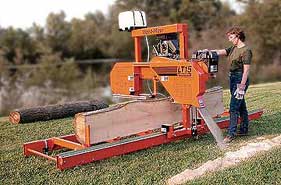 Do I even have to say how cool this thing is? You make square timbers from trees. That’s what it does. Granted, I think you have to make a lot of beams and boards to justify the cost of one of these bad boys. We spent more than half-a-day setting up the Wood-Mizer personal saw mill at Handshouse and we used it to make most of the timbers that we used to build our crane. The coolest thing that we did with it was make a huge hexagonal oak timber using a homemade jig that we placed between the oak log and the sawmill bed. Oh yeah, we got two free Wood-Mizer baseball caps with the saw mill. For FREE!

This thing is called a cant hook or a peavey (even though a peavey is supposed to have a point at the top). It’s used to move big logs around and it is COOL! What you’re looking at is the tip of it and it has a long wooden handle. The handle is long and that leverage makes you a he-man when it comes to rolling tree-sized logs in place, moving them into a pile, or whatever. The reason why this is cool is because it’s such a simple tool with a simple principle behind it and it probably hasn’t changed in a century or so. I want an old one for Christmas, so make a note of it. 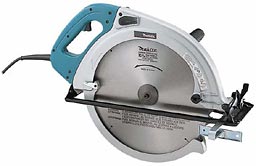 Yeah, this might look like a regular ol’ circular saw – until you realize that the blade on the one here is 16 inches in diameter! And they get bigger. Like up to 20 inches! Yeah. It’s sometimes called a beam saw and I think you’d only really use it in timber frame construction for cutting big lap joints or big tenons in mortise & tenon joints. The one I used was only 13 inches and that was pretty heavy – I can’t imagine using the 20 inch saws for any length of time. It’s probably a little scary, too. 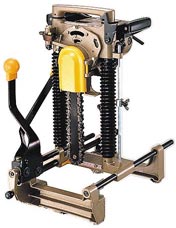 Man, this thing is cool! I had only seen chain mortisers in magazine ads until last week when I actually got to use one. It’s kind of like 20% chain saw and 80% jig. You use it to cut mortises for mortise & tenon joints. That’s it. You drop over a grand on a tool that does absolutely one [relatively obscure for most people] thing. They don’t have these at Home Depot. 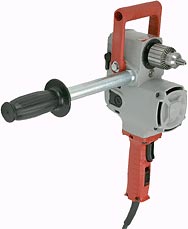 So, I had to drill a 2 inch wide hole in the end of the aforementioned oak log. Enter the Hole Hawg with a 2″ forstener bit and a half-a-bicycle-handlebar screw-in attachment to keep you from flying around in circles. While I was preparing for battle, Joel (of the Timber Framers Guild) was relaying an anecdote to me, in which he was thrown from the roof of a building by a particularly angry ‘Hawg. Yeah. Basically, trying to drill this hole was like a clash of the titans. At some point I got tired of my arm being violently yanked from its socket and decided to brace the tool on my knee. I succeeded in creating a nice bruise on my knee and almost causing this several-hundred-pound piece of oak to fly off it’s supports and onto the ground (or a bystander). This isn’t a very friendly tool. It’s angry about having a name that’s bound to amuse the average 11 year old and embarrass a junior high school woodshop instructor to no end. It’s more than willing to misplace that anger squarely on your poor, frail, human frame. It’s still pretty cool, though. 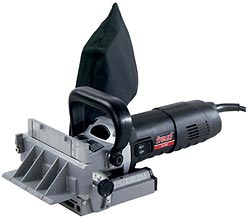 This is an amazingly cool tool – a biscuit jointer. I’ve read a bunch of woodworking books and I’ve always seen biscuit jointers mentioned. I’ve seen them in the shop at MassArt, but now I’ve actually used one and it’s awesome! They’re so easy to use and it makes gluing man-made wood like plywood and MDF so much nicer. I kind of wish I had used it on some things I did the hard (and not-so-sturdy) way in the past. 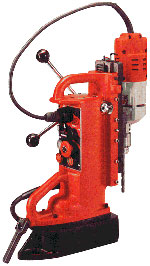 On to the metalworking tools. I didn’t even know these things existed until a few days ago! It’s a drill press with a big electromagnet in its base. You put it on a metal table, hit the button and WHAMMO it’s stuck to the table. You can dropkick it and it won’t budge. You then do your drilling, push another button to demagnetize it, move it to the next drilling spot and do it all again. I definitely saved myself hours on the project I’m working on right now by using this thing instead of a regular drill press. (I’m drilling a LOT of holes.) 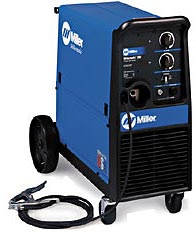 Okay, so I used a MIG welder before a couple weeks ago, but I’ve really started to appreciate it this past week. I’ve always been kind of annoyed by the fact that it’s such a pain to cut, drill, and bend metal. I mean, I love wood. It almost wants to be cut and manipulated. But metal, it wants to fight you. It wants to warp and twist and wriggle out of its clamps. But it’s starting to occur to me that I can weld things together temporarily, do what I need to do, and grind the tack weld off afterward. It’s quicker, easier, and stronger than fighting with clamps. And because MIG welding is so damned quick, I can make jigs in a few seconds. I guess I never thought to use welding in this way – I always looked at it as a way to try to stick things together forever. Oh, our MIG welders at MassArt don’t look like this one but I couldn’t find a picture of a grubby metal box that looks like a prop from a 70’s science fiction movie.

An angle grinder? Everyone’s used an angle grinder! But I’m adding this for two reasons. The first is that I’ve gained a new appreciation for it now that I know how to use it without having it kick back at me, which discs to use for which tasks, and how useful of a gadget it really is. The second is to advertise this specific grinder. I have this Ryobi grinder and it’s great. We have big ol’ DeWalt grinders at school but this Ryobi is lighter, smaller, and more comfortable to use, without feeling underpowered. I recommend buying this one. I got mine at Home Depot for around $40 I think.

I’m convinced. The die grinder is the noisiest and most annoying tool in the shop. Everyone will hate you when you use it. But you know what, it’s worth it considering it saved me from a lot of fooling around with a round file. This is basically a Dremel on methamphetamines. I love it. Combined with the compressed air connections that we have on the walls at school, this tool is one of my new best friends. Or at least an acquaintance that I’ll nod at when I walk past it in the halls.